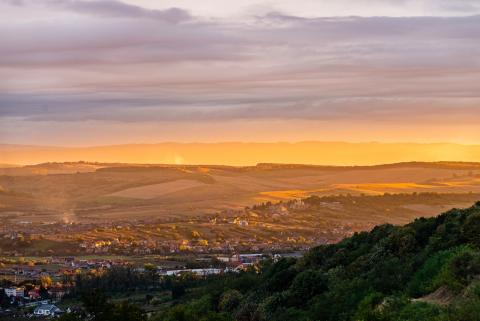 Decarbonisation will not be achieved merely through political commitments, it also requires rigorous evidence-based planning. Romania still needs to publish its long-term strategy (LTS) on how decarbonisation will be achieved by 2050. Since the initial deadline of January 1st, 2020, several key events and EU-level strategies have unfolded, which should be taken into account in Romania’s upcoming LTS. The European Green Deal and the Fit-for-55 package brought forth a whole new level of ambition for GHG emissions reduction, while the REPowerEU will accelerate the pace of the climate transition in the short and medium-term, following Russia’s invasion of Ukraine. The Romanian LTS needs therefore to outline a plan for the rapid decarbonisation of the economy with the prospect of reaching climate neutrality before mid-century.

To assist in this endeavour, this report presents the results of a modelling exercise using the 2050 Pathways Explorer developed by CLIMACT and calibrated and adapted for the Romanian case study by EPG. Three scenarios have been developed: (1) Tech scenario, assuming a rapid development of cutting-edge technology and rapid cost reductions, (2) Life scenario, assuming transformative changes in lifestyle choices and individual behaviour, as well as high levels of political buy in, and (3) EPG scenario, which is the recommended one, represents a more balanced approach relying on a combination of more moderate transformation when it comes to technological development and behavioural changes among the general population. All scenarios achieve climate neutrality or even net negative GHG emissions by 2050, compared to a businessas-usual scenario that only sees a 16% decrease in emissions compared to 2015.

Between 70% and 100% of energy consumption from buildings, transport, and industry would need to be sourced from renewable energy, while coal, fossil oil, and fossil gas consumption would be reduced by more than 90% across all scenarios. Direct electrification and reduction in energy consumption are the most important decarbonisation levers, with an important role also played by hydrogen, e-fuels, and biomass. Romania’s natural carbon sink contributes up to 90% to total envisaged removals, while carbon capture technologies play varying roles across scenarios. Lifestyle changes are also key – even scenarios with more relaxed assumptions on behavioural change will require heightened awareness and a mobilisation of personal investments in energy efficiency measures, electric vehicles and other low-emissions products and services.

Providing credible emissions reduction pathways is only one component of a strong Long-Term Strategy. An ambitious vision, sectoral detail, and robust governance mechanisms should all underpin the national LTSs – but the extent to which they are included varies across Member States. Romania could create a truly impactful LTS, aligned with the realities of the current policy context, launching it as a regional leader in enabling climate mitigation.

The Romanian LTS should firstly be centred on a clear commitment to net zero GHG emissions by 2050 and set itself the ambition of reaching it even earlier. It should not shift the burden of emissions reductions to later decades, but focus on higher emissions reductions in earlier years. Secondly, the LTS should provide sectoral targets and mitigation pathways, using scientifically robust scenarios for sectoral and economy-wide emissions reductions. These scenarios should account for the particularities of the Romanian context, for example in terms of technology availability and applicability and behaviour change potential. Thirdly, enabling measures such as financing and R&D should be properly addressed, and a detailed evaluation of the socio-economic impact of proposed measures should be provided.