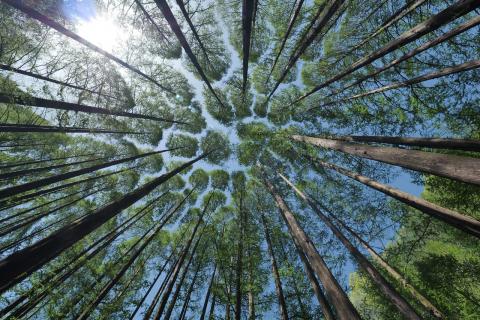 In this report we analysed how EU Member States addressed the Land Use, Land Use Change and Forestry (LULUCF) sector as well as other carbon removal options in their national LTSs.

In accordance with the Paris Agreement, the global community needs to make its best effort of keeping the global average temperature rise to 1.5°C compared to the pre-industrial average. In the EU, after reaching climate neutrality, net negative emissions must be achieved. To achieve that, each EU Member State is required to adopt and regularly update a holistic decarbonisation strategy until 2050, known as a long-term strategy (LTS). While GHG emissions can be removed by natural sequestration in soils, forests and oceans, technological removals like Bioenergy with Carbon Capture and Storage (BECCS) or Direct Air Capture (DAC) are also possible solutions. Further, technological options that avoid additional emissions, Carbon Capture and Storage (CCS) and Carbon Capture and Utilization (CCU) also contribute in some sectors. In the last 30 years, the carbon sink in the EU has decreased. Currently, the most ambitious scenario (with additional measures, WAM derived from EEA database of LULUCF emissions), entails a sink of -209 Mt CO2e by 2030, while the EU Reference Scenario foresees a sink of -271.1 Mt CO2e in 2050 and the ‘Clean planet for all’ communication includes a sink target of around -400 Mt CO2e by 2050 as well.

The structure and requirements as well as the need to include projected emissions reductions and enhancement of sinks by 2050 in the LTSs are set out in Regulation 2018/1999 (Governance Regulation) of the European Parliament and Council. As the guidance regarding content and format set out in Annex IV to this Regulation is rather vague and sparse, the level of detail and structure of the LULUCF sector was found to be highly variable between LTSs. For example, not all countries have specified the level of emissions reductions in their LTS required to reach climate neutrality. Therefore, in this report minimum boundaries were established for total necessary sequestration based on the stated or implied maximum level of reduction each country has proposed (on average 87% compared to 1990), the so-called sink requirements, and then compared to the EU reference scenario. If no clear emission reduction target was given, a value of 85% from 1990 levels (excluding LULUCF) was used. The same procedure was used for countries who had yet to publish their strategy (Bulgaria, Cyprus, Ireland, Poland, and Romania) as of August 31st, 2022. Bulgaria by now has published her strategy, and you can find an analysis thereof on this website. Recommendations for Romania are set out here. The analysis in this report highlighted that the assistance natural sink enhancements can play in reaching climate neutrality are not uniformly distributed across Member States.

Natural emission and sequestration processes are found across six different land-categories: forest land, cropland, grassland, wetlands, settlements, other land. We analysed to which extent these were covered in the strategies (inclusion of description, measures, and targets). Forestry was separated from other land categories as by far the most information was provided on this. As agriculture will soon be combined with LULUCF in the EU and the Governance Regulation also treats them together, agricultural measures were sometimes included in the analysis from the land use emissions perspective. LULUCF and natural removals cannot be viewed with tunnel vision, which is why overlaps with using bioresources, biodiversity and adaptation are also included in the analysis. As the countries do not always distinguish CCS/CCU from actual carbon removal technologies (BECCS and DAC), future updates could state more clearly which of these technologies is targeted. CCS and CCU are referenced far more often than BECCS/DAC. No country is currently putting much emphasis on direct air capture as a potential solution within the lifetime of the current long-term strategies.